This was my final day of flying for #7flightstoABZ, having flown into Heathrow the day before. It was an early start to drive my hire car back to the airport, but it was a smooth journey, both to Heathrow and through security to the North lounge. The lady on the desk told me that the flight would be departing from A19 at the south end of the terminal, so I made my way down to the other end of the airport.

I had some of the porridge with sultanas, cinnamon and honey that I think is one of my favourite lounge foods. Unfortunately it doesn’t photograph very well, so you will have to imagine it! I then settled down with a cup of coffee and a crossword (managing three clues in the Times Cryptic crossword!) I was booked on a Boeing 767 which is a great aircraft that is becoming a lot less common. The Club Europe configuration is 2-2-2, but the outer seats are side by side without a free middle seat, so I had booked into the middle section. A couple of days before, I noticed that the front row was available so I grabbed 1D. This was a good move, as I had a notification in the lounge on MyFlights that there had been an aircraft swap from the B767 to an A321, and that my 1D seat remained meaning additional leg room.

I spend much of the flight dozing, so there is not much to report on the journey. We were pretty quick to get onto the gate by Amsterdam standards. I arrived into one of the D gates, and didn’t need to do any passport-showing. I had a wander of the shops and headed to the lounge. One of the benefits and downsides of the lounge are the huge floor to ceiling windows. They give a great view of the planes below, but there is absolutely no shade at all on a sunny day; I had to put on my sunglasses to be able to look out. It was no hardship!

I went down to the gate and saw that we would be flying on a “Rusty Dove” – one of the A319s with a paint job that is meant to look like a dove. 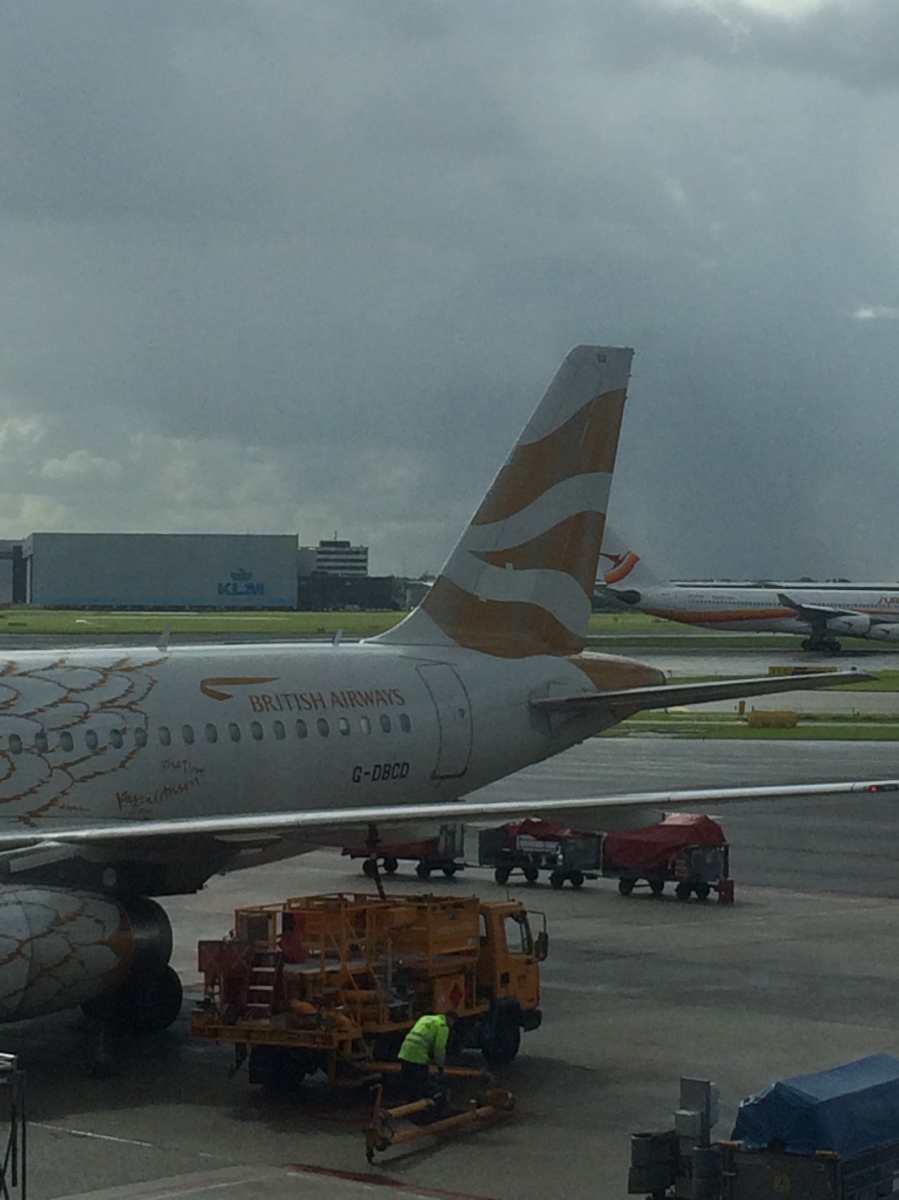 Boarding was fairly well organised with it being called in order and I was soon on and in my seat 1F, where I was to remain for the next three flights. I had just a cup of coffee on the flight, and was pleased to see that it came with an unsolicited biscuit!

The aircraft was late arriving into Gatwick and then there was an issue with getting the air bridge to the plane. This was the pinch-point in the whole trip, as there was only a one hour connection before my flight to Jersey. This AMS-LGW-JER section was booked on one ticket, so I knew that BA would have to protect the connection as it was their fault the aircraft was late, but that put my final JER-LGW in jeopardy as it was on a different ticket. I had a quick check on Flightradar24 – a fabulous app which you can track aircraft – and found out that my LGW-JER was being operated by the aircraft I was sitting on. That was good as it meant that they were behind schedule. 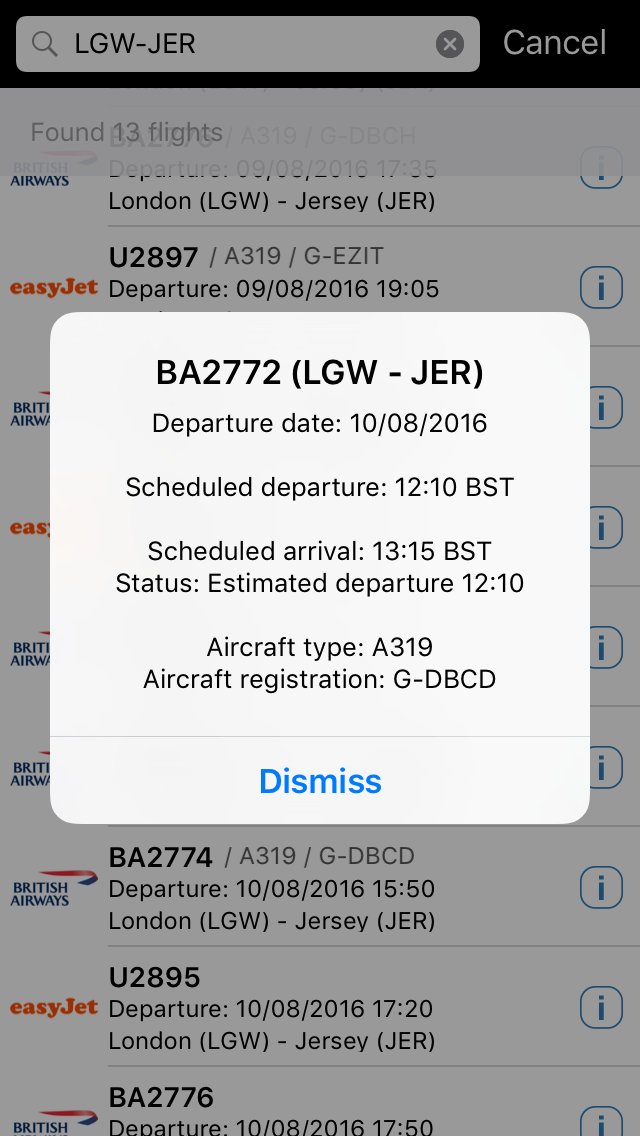 As soon as I could, I was off the aircraft and made my way to flight connections. However, despite being able to use this route outbound, I was not allowed to use it now because I was an international connecting to a domestic and not the other way round. I had to go through passport control to officially enter the UK before being able to get on the plane to Jersey. There was a BA desk next to flight connections, but the lady there was worse than useless. She told me there was no connection facility, no fast track section and no provision to expedite things in the case of a tight connection. The queue was massive and people seemingly unable to move forward to the e-passport gates when there was a green arrow.

I got through, almost running out into the terminal and back round to the departures and straight to fast track security. Where my boarding pass wouldn’t scan.

The man at the gate scanned my pass and a sign flashed up on his computer which said “12:42 – 8 minutes until departure. Allow or Deny?” Thankfully, he was happy to let me through as I explained that the plane was late and it was the same aircraft. I then got through security only to have my laptop pulled, swabbed and sent through the scanner again. With it back in my possession, I then legged it through the departures, past another boarding pass check and down to the gate to see that boarding had only just began! Made it! I even had time to go to the toilet. 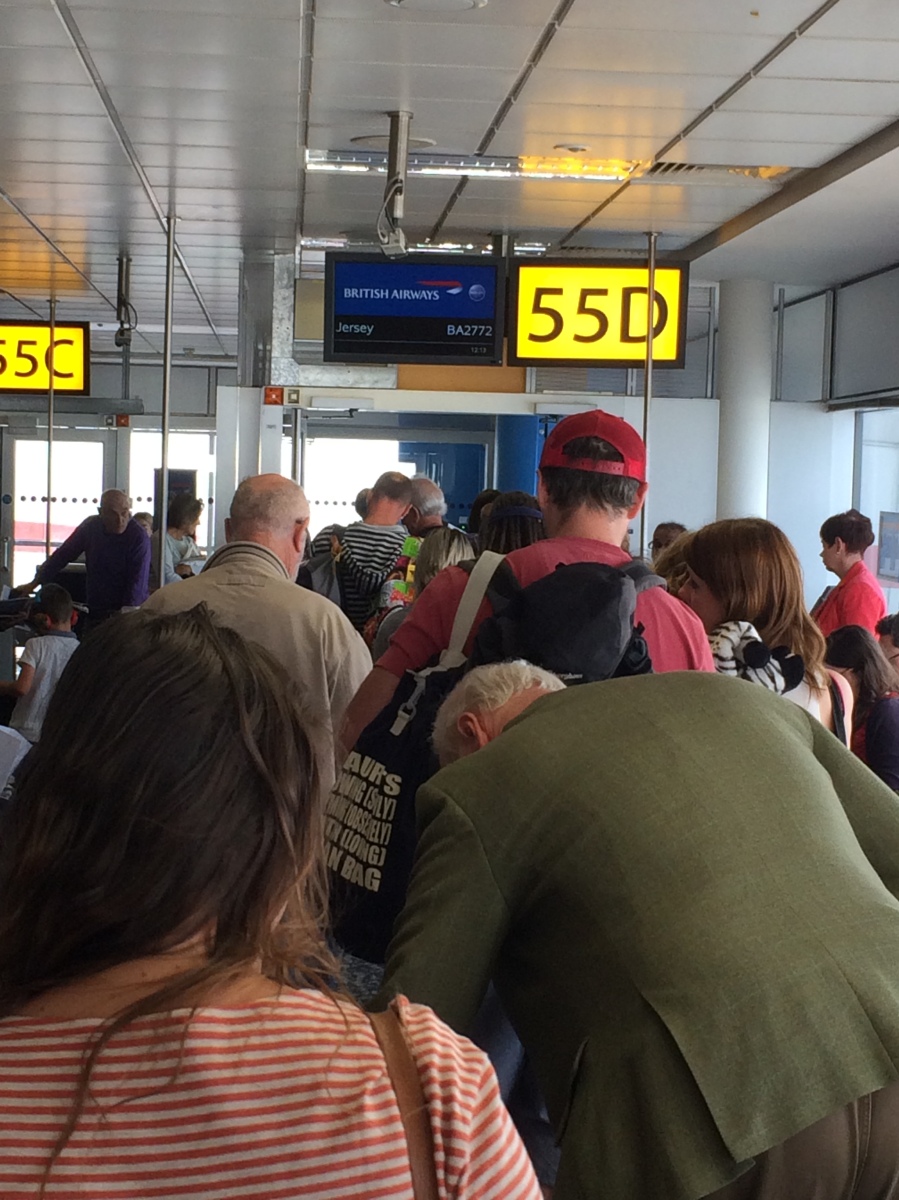 We set off about 30 minutes late, but that was not a problem as the return leg was on the same plane. I turned down a lunch on the plane, because I ordered a special meal on the way back and didn’t want to mess up the system. This was a bit of a mistake as the outbound lunch looked like a really tasty prawn and asparagus salad which would have been fine as a pescatarian, where as the inbound was pretty rubbish.

I continued to have issue with the pre-ordered vegetarian meals. Sometimes they serve these first with a “Mr Airmiles, I believe you ordered a special meal” or when I was on my first flight on this trip, the Cabin Service Director came to tell me when I boarded that my breakfast had been loaded. Other times, they try to give you a normal meal and you have to ask if there was a special meal loaded. This was one of those times – the CSD said “Oh yes, I do remember seeing one” *cue 3 minute rummaging at the back of the trolley*.

Jersey is great for a back to back, as the lounge is right next door to the entry and the gate, so despite being on the ground for 30 minutes, I was able to spend 25 of those minutes in the lounge to watch some Olympics and have a cold drink.

When I arrived back into Gatwick, I noticed that there was another boarding pass on my phone for the 1550 flight to Jersey!

I spoke to the gate agent at the top of the ramp to let her know that I would not be taking the flight. She looked into her computer and saw that there was a ticket for me on the flight, but that I was not checked in. On further investigation I saw that the flight was not ticketed so I didn’t worry about it – it must have been automatically generated as I had such a tight connection before that they thought I would miss conformance. I headed off to the bus for the car park and home.