My few days in Fife had come to an end with an early start and a 0633 train up to Aberdeen and on to Dyce for the airport. The station is just behind the airport so it is necessary to get a transfer. On the way out I took a taxi because it was the weekend, but on the way back I thought I would be able to get the shuttle bus. It is signposted as the Airlink transfer, but there was no bus when my train pulled in at about 0825. An Inverness train pulled in from the other direction a few moments later and still no bus. In fact, the timetable said the next bus wasnt until 0906 – that was cutting it too fine for a 1000 flight, so I got in a taxi with another passenger and we split the £10 fare.

Check in for the flight back up to Shetland was at the Flybe desk rather than the BA area. It took a little bit of time with the check in agent as I needed to pick up my bag in London for the overnight as opposed to in Amsterdam. The route drew some interested questions from the supervisor but there was no problem. I was given a ticket for the third-party lounge that Flybe use in Aberdeen and a pass for fast track security. The airport is small and the lounge basic.

Food offering was some bacon sandwiches which had probably been there for a while, and some pre-packaged croissants. I wasnt there for long before boarding commenced.

The Saab2000 was on stand, and the cabin crew was the same woman from my GLA-LSI-ABZ flights last week. I was seated in the back row although there were plenty of seats free in front.

What was slightly annoying was the woman next to me had sat in the wrong seat to start with, wanting the single seat on the aisle, which was later claimed by someone else. Her seat was next to mine, but rather than move to a whole row in front, she sat next to me so it was a little cramped. It was a relatively smooth flight into Sumburgh given the battering from the winds it had been having. I remembered to wait around for my bag this time given what happened on the way up. Despite the fact that it had two massive transfer tags on it, the bag was still dumped onto the carousel so I picked it up and took it round to the bag drop off section before going through security to the cafe.

The airport was fairly busy with three flights leaving in the hour before my flight.

On the way to Glasgow, I was treated to a new aircraft, a Saab340.

This is smaller than the other props that I had flown on, with only about 35 seats compared to the Saab2000’s 55 seats. The flight was fine – I had downloaded a programme onto my ipad and with the noise-cancelling headphones, the noise was not an issue. You certainly notice how much the aircraft swings and sways, especially on the approach, in the wind – much more so that on a larger jet.

Out of the plane, and straight into the British Airway’s lounge for some lunch. I really like the sandwiches and the cheese and biscuits along with some chutney, so I had a little bit of each. I did some work on one of the high tables. I really like the layout of this lounge as there are so many different spaces – the arm chairs, the high tables, the big tables and the individual tables.

There is also a ‘snug’ sponsored by Glenlivet which has a variety of whiskies on offer and a mock fire place. The toilets are down stairs, and are far nicer that the clinical ones at Heathrow.

I waited until boarding had been called before making my way down to the gate, where priority boarding had been and gone. I was in an emergency row for the extra legroom as normal and, as I discussed here, had no-one next to me giving some more space.

The flight was short and had the usual service on a domestic flight. We flew over London on the approach and I was able to get some day time pictures similar to the night time ones on the way out. I also got a little Olympic snap – place looks a little different from 4 years ago! 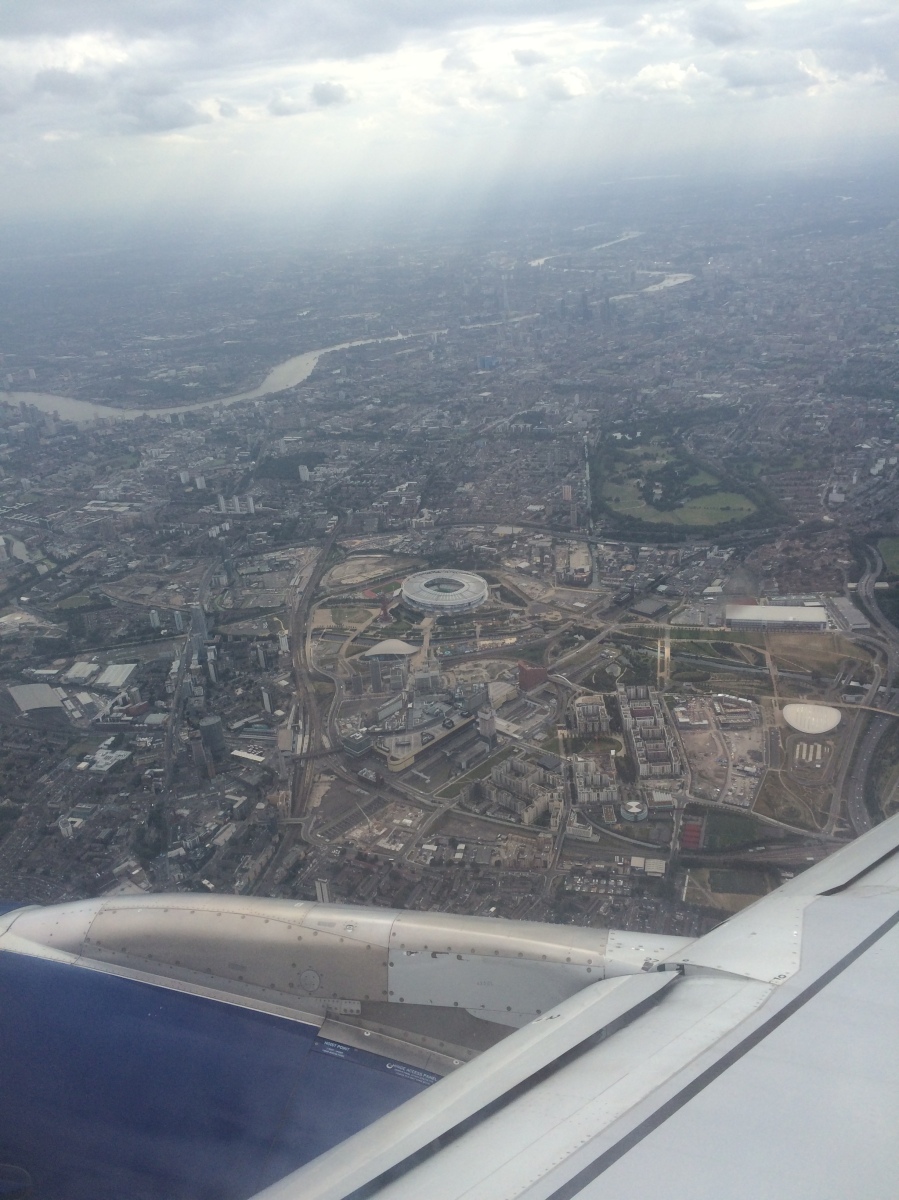 We went straight into a gate on the northern edge of the terminal and it was a short walk to baggage reclaim to get my bag, before heading off to collect my hire car from Avis.