Having flown from Gatwick out to Jersey, and then across to Amsterdam and back to Heathow, I stayed the night at the Sofitel Heathrow T5 before embarking on my second day travelling.

I had a text message and an email from BA telling me that the flight was very busy and that I could check in any cabin baggage for free.

This is presumably aimed at those saving a few pounds on the Hand Baggage Only fares. I had to put mine in the hold anyway as I had some duty free that was more than the 100ml limit.

I got into the terminal and wandered down to the southern end and Zone H, which is the dedicated Club Europe / World and Silver check in desks. The queue was long, but moving quicker than some of the other general lines. I got chatting to an American family on their way home to San Diego who had been impacted by the recent changes to BA’s handling of bags. In the past, you could have booked two separate tickets and had the bags sent all the way through. This was especially helpful for people like this family who might have bought a return ticket from San Diego to London, and then done some intra-European travel before booking a one-way flight to connect to their long haul. They used to be able to deposit bags in Amsterdam and pick them up in the USA at the end of the journey.

But this has now stopped. The family had flown in from Amsterdam on the first flight of the day, had to clear immigration, collect their bags, take them upstairs to check-in and then go through security on their layover. It is an example of British Airways reducing their liability for lost bags in what is, I feel, a small-minded move. I get that it will cost the airline money to compensate people if they lose the bags, so there is a potential saving there if they lose them. However, there must be an actual cost to the increase in foot traffic using immigration, check-in and security. I would also imagine that they might miss out on short-haul connection traffic as people move to low-cost carriers and increase their layovers – they might as well if they have to do all the rigmarole anyway. The family was also missing out on the lounge whilst waiting in the queue – I wouldn’t be surprised if they flew with someone else next time.

I was able to drop my bag and get all my boarding passes printed. The man was a little bit surprised and asked if I my bag was going to Aberdeen, why was I on a flight to Glasgow – but it was all ok in the end! I then walked up to North Security fast track and was, as is becoming normal, able to get through in a few moments. Knowing my flight was leaving from A4 at the north end, I decided to try out the Galleries North lounge. I only had 20 minutes, so there was no point going down to my usual spot in the South Lounge. I had only been in this one once before for all of 30 seconds as it seemed so crowded and messy. I was pleased that my previous experience was not repeated. I was able to get a piece of toast and some orange juice, and find a seat overlooking the runway. I didn’t realise there was a large section round to the left on entry, but it makes it much larger that I had thought it was. 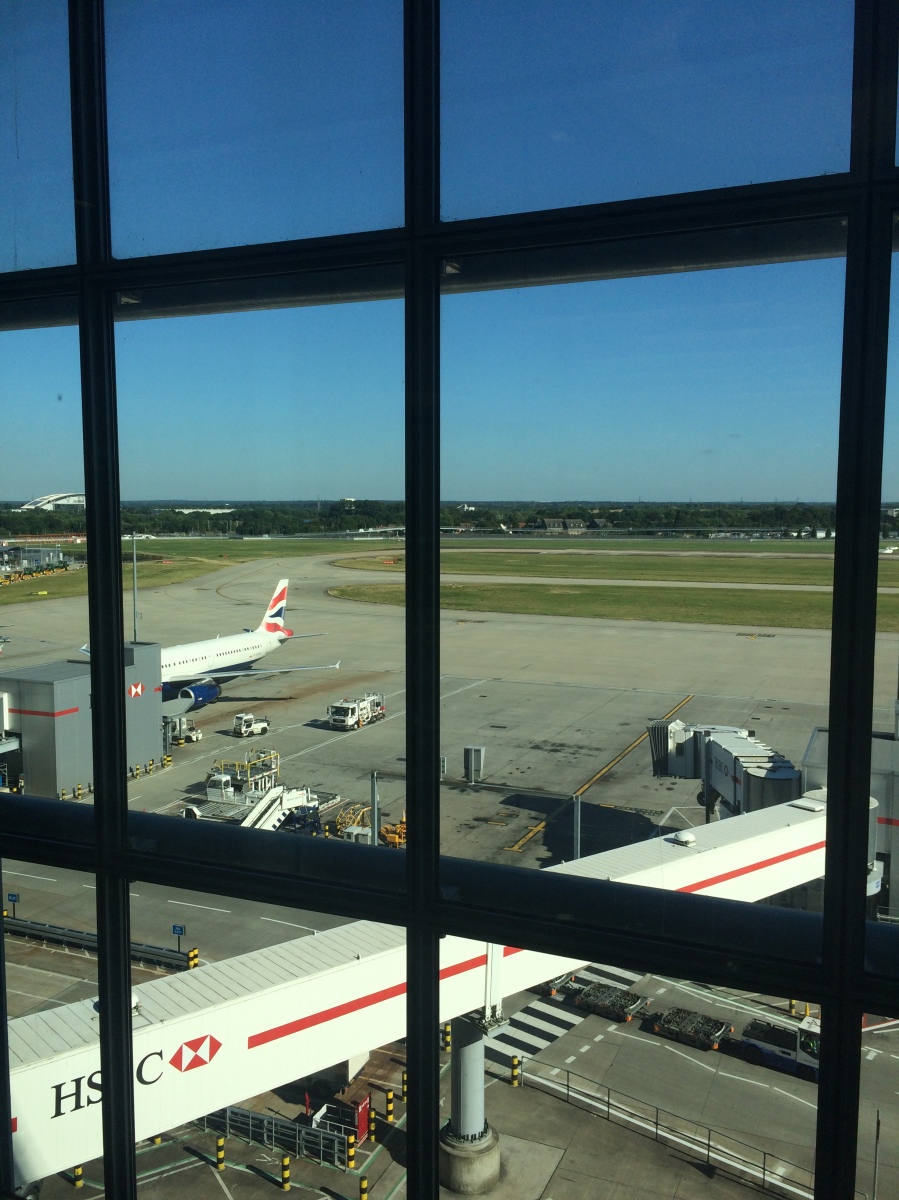 The flight was soon ready for boarding so I popped down stairs and along to the bus gate. The flight up to Glasgow was being operated by JetTime, a Danish company, on a wetlease. This means that they provide the plane and the crew, and BA will do the catering and marketing of the flight. It was a Boeing 737, similar to the one I had flown down on from Aberdeen last year.

I had been able to secure the exit row window seat which has no seat in front of it, giving exceptional leg room.

The flight was smooth and uneventful – given my late night and early start I dozed most of the way. We landed into Glasgow on time and I headed to the British Airways lounge.

The lounge was small and quiet, with the remnants of the breakfast service in the buffet. I had some water and did some reading whilst waiting for the lunch time offering of sandwiches, soup and cheese to be put out. The only drawback of the lounge was that they only display BA flights on the board. Whilst my flight up to Shetland had been booked with BA on a BA number, it was a code share, and therefore not on the list. I had to leave the lounge to find out what gate it was leaving from, and I made my way round to 31 with about 25 minutes to departure. A time which came and went. There was an aircraft waiting and people at the top of the ramp to board us, but no details as to why we were delayed. This was making me slightly anxious as my connection time in Shetland was only 30 minutes.

This was the first time that I had flown in a Saab2000, a propeller plane in a 1-2 configuration.

I had 4A on this leg. There were 2 crew on the flight deck and one in the cabin who had to do the safety demo on her own by talking to us, putting down the microphone and then demonstrating. The seats were comfortable and there was plenty of leg room. What I hadn’t expected quite so much was the noise. It was loud, but not overpowering. For the first time on the trip I dug out by noise-cancelling headphones which worked a treat.

We were mostly above the clouds across the mainland, but they disappeared as we dropped down towards Shetland and we were treated to the most spectacular views across the sea. There were also some interesting photographic quirks on display. 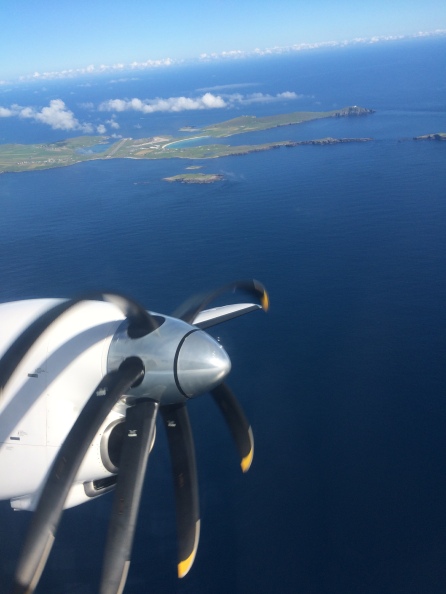 We landed with a bump in at Sumburgh Airport and were the only aircraft at the terminal, which is undergoing an upgrade.

This is where you can see the difference between big and small airports. A flat bed van rolled up to take the luggage to the terminal, and passengers wander across to arrivals. There is a small hatch in the left of the arrival door which the bags are fed through and gravity takes them down on rollers.

Unsurprisingly, there is no flight connections here so going into arrivals necessitated going back through security which took all but a few seconds. I was then in the departure lounge with a surprisingly well-appointed cafe and tiny duty free shop.

At that point there was a tannoy announcement for me to make myself known at the gate. Apparently they were missing my bag and asked if I had picked it up from the belt. I was not expecting to see the bag again until Aberdeen seeing as I had checked it all the way. The lady then disappeared to find it and sort the issue. When boarding on the tarmac the baggage handler came up to me to let me know that everything was ok and that he had personally put my bag on the plane!

One thing I saw that I thought was really cool is shown in the picture below. Just under the window there is a black circle which is actually a little hole. A moment before I snapped the picture, the pilot’s arm was poking through so he could get hold of the paperwork from the ground crew – never seen that before and I thought it was pretty neat! 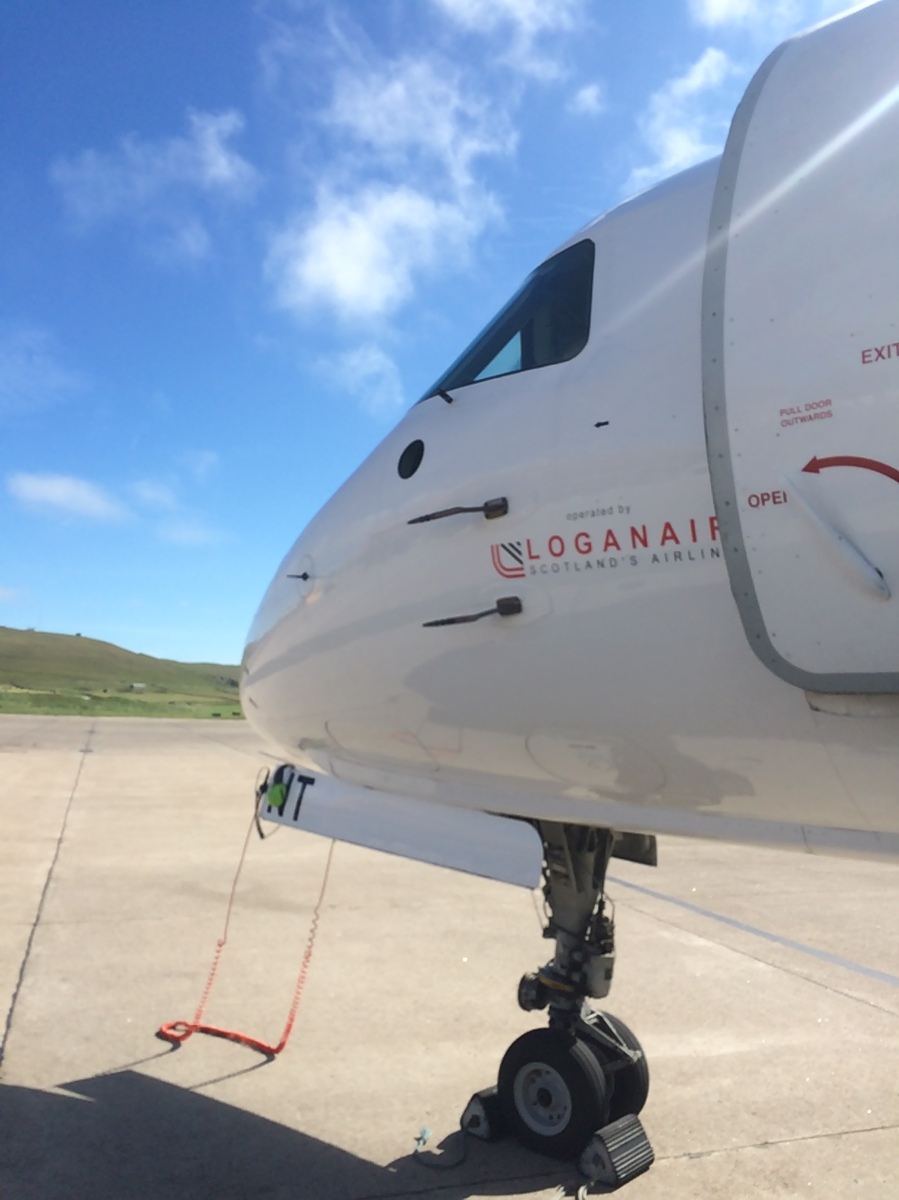 The plane being the same one that I had come up from Glasgow on – so I needn’t have worried about my connection! When I got back on board, the flight attendant joked that I could just have stayed on the plane as my trip into the terminal was so short! The service on the second flight was identical to the first and with a flight time of less than an hour, we were soon over the coast near Peterhead and into Aberdeen Airport.

The domestic baggage hall is actually outside the airport in some porta-cabins whilst they are refurbishing areas of the terminal, and thankfully my bag soon appeared.  After 7 flights and 2 days, I had made it to Aberdeen. I jumped in a taxi, sped round to the train station at Dyce and was soon on a train to meet up with my friend who I was visiting for a few days.