My Tier Point year ends on the 8th March and, as I have no more flying lined up, I thought it would be interesting to review my year in the air.

This year I have flown more than I have ever done before, including:

The majority of my flying has been domestic and intra-Europe to GLA, ABZ, MAN, BHD, DUB, FCO and NCE x 3 on a mixture of cash and redemption fares.

I earned a total of 1020 Tier Points, planting me firmly into Silver, but too far away from Gold to justify chasing it. I also earned 32505 miles from flying. This takes my lifetime tier points up to 1270 since I joined the BAEC in February 2008, so it has been a busy year!

For completeness, I also flew 4 sectors on Alitalia (TLS-FCO-NAP-FCO-LHR), although too late for me to benefit from the status match.

Once the year is over, I will also look at the Avios earned from other areas like the AmEx and car hire, as well as Avios spent.

My upcoming year looks, at the moment, less busy. I have a few days booked to Nice, a TP run with my mum and an ex-CPH to SFO. 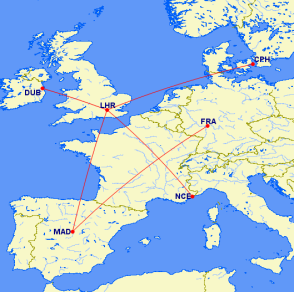 This should see me to 600TP and a re-qualification to Silver until April 2018.

There are a couple of fun routes that I would like to try:

JER-LGW-AMS-LGW-JER with a nested AMS-LHR-GLA-KOI-ABZ-KOI-GLA-LHR-AMS can be had, earning, I think, 360TP and about 11,000 Avios. It is possible to do the LGW-JER-LGW-AMS-LHR and reverse on a Thursday and Monday, leaving the LHR-GLA-KOI-ABZ outbound on the Friday and in on the Sunday, which is fine for me as I live in London so cuts down on the accommodation costs. But is is a little crazy…! 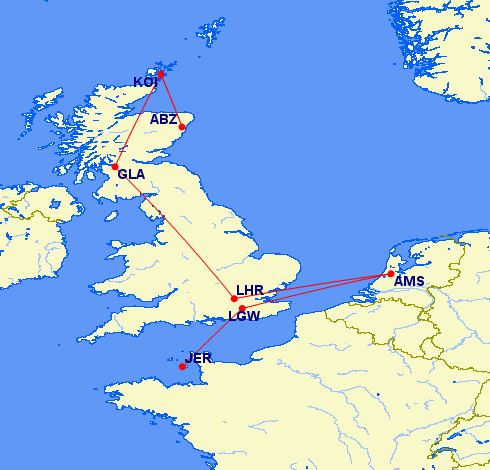