I am terrified of sleeping in. I once slept in at school when my dorm-mates didn’t wake me up, and awoke at 1030 having missed the first 2 lessons. I was also 28 minutes late to a university exam; a fact I managed to keep from my Mum for many years until my wife told her. And so it was that I requested an 0500 wake up call, set the alarm on the hotel’s TV for 0503 and on my phone for 0510 and 0515.

Thankfully it wasn’t all necessary and I awoke at the first alarm and was showered, dressed and packed in plenty of time for the 0540 complimentary shuttle from the Crowne Plaza Dublin Airport to the airport itself. The bus was on time, and so easy, that it makes the CP the perfect place to stay if you need an airport hotel. It was a very short walk from the drop off to the terminal, which was good as it was so wet!

The check-in and security was quiet, so I was in the lounge with my second coffee of the day just after 0600 for a flight at 0745. I did think that I could have had a little longer in bed, but was better safe than sorry. I spotted this interesting departure board that you don’t often see anymore.

It was during this stay in the lounge that I got a notification from the BA app that my LAX-LAS was open for check in. I already had my boarding passes, thanks to the lady at DUB check-in, but it hit me that this was in T-24hrs, and that I would be awake for the next 30hrs give or take.

The flight was called and I went down to the gate a 208. I was in 1D so waited until the end to board so I didn’t have everyone banging into me as I boarded.

I knew that I would be offered breakfast on board but I also knew that with my ticket in First I would have access to the Concorde Room at LHR so I only had coffee and orange juice on the flight. There was plenty of legroom being in the front row.

We landed just after 0900 and I had my first experience of international transfers at LHR. The process was fairly painless, although I did end up getting a little lost on the way. Once through security and passport control (again! – I had already done this in Dublin and was therefore in a ‘sterile’ zone) I made my way to the Concorde Room.

A table was available for breakfast, where I indulged in smoked salmon and scrambled, eggs, toast, champagne and orange juice to make a Bucks Fizz and some excellent coffee.

It was at this point that I had a text from a fellow traveller. Both he and I are members of FlyerTalk, an online community of frequent flyers. It was through this community that I was able to find out about the cheap ex-EU fares that I am travelling on, as well as learn about Avios redemptions and everything else there is to know about flying. Each major airline, hotel and car hire group with a loyalty programme has a section. One part of the British Airways Executive Club forum is a thread where members post their travel plans and offer or request access to a lounge. This is usually a perk reserved for those in premium cabins or BAEC Gold and Silver members. People who offer have nothing to gain, save the opportunity to meet like-minded individuals. I had had the pleasure of meeting a fellow FTer on his way to Milan in June who guested me into the Galleries First lounge where we enjoyed a lovely dinner and an hour of conversation before our flights. This was my opportunity to return the favour. My guest was on his way to Sweden to take part in one of the first male syncronised swimming competitions on an international stage. We shared a glass of champagne before I headed to the spa.

Travelling in First, you can book a treatment at the Elemis Spa up to a month in advance. Certain status passengers can also take advantage of this on the day. I was able to get a booking and had a facial, whilst sitting in a full-body massage chair. It was short, at only 15 minutes, but it is free, and it was very enjoyable. It was the first time that I had had a male masseuse. 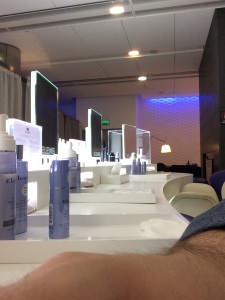 At 1045 I left the South Lounge complex and took the escalators down to the transit level. It was heaving! I then decided that I would take the walkway across to the B gates which is something that I leant from Flyertalk! When everyone else was leaving the lifts to join the throng, I was waiting to get in and decent to Level -4 and an oasis of calm. 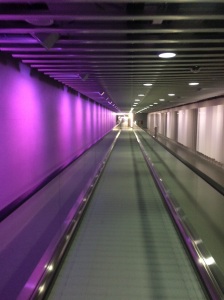 One exits the lift and then gets on 4 moving walkways. I was the only traveller A-B bound and saw 4 people making the return journey, It was about 8 minutes of solitude in one of the busiest places in the world before rejoining the masses and boarding the plane.

I was shown to my seat and offered a wash bag, PJs and a drink, to which I said yes to all! I changed into the top and my shorts and drank champagne before the SCCM, Greg, came round to introduce himself. We took off and headed west.

This was not my first time in First, but it didn’t matter. As I discuss here, First seems to be a place where who you are doesn’t matter. I had a Kir Royale and some warm nuts before lunch which started with an amuse bouche of salmon.

This was followed by Portland crab and avocado timbale with basil sorbet and chive oil. I have no idea what a timbale is meant to be, but this was incredible. 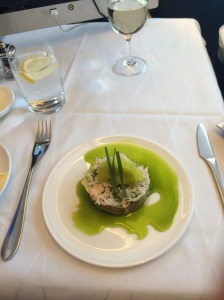 This was accompanied by an obscure English wine. I had thought I would go French, and tried the Meursault, but it seemed a little off. Sid then suggested the Bolney Estate Pinot Gris.

It was the most incredibly clear wine I have ever tried. It looked like water in a glass, but packed a bold flavour and was delicious. Certainly a great introduction to English wines.

For main I had seared filet of Hereford beef with courgette rosti, green beans and morel jus, which was accompanied by small glasses of the Wait La Brisa pinot noir and the St Emilion grand cru (the latter was my favourite).

My other cabin-mates had a cheese plate and desert which looked appetising but I was full. Service throughout was discrete and attentive, with Sid, Carol and Kay looking after us very well. You can read about my thoughts on the skill of the cabin crew here.

The rest of the flight was uneventful and we landed into JFK on time.

More on the rest of Day 2 can be found here