Flights to Nice are my benchmark for value in the miles and points game. I know that I will happily pay up to about £150 per person return. There have been times where I have got a better deal, particularly when tying it in with a car hire. There are other times, however, where the prices can be really steep that using Avios is a much better deal.

Flights for a weekend at the end of September were coming out at £643 for two on a hand baggage only fare, which is well above my threshold! 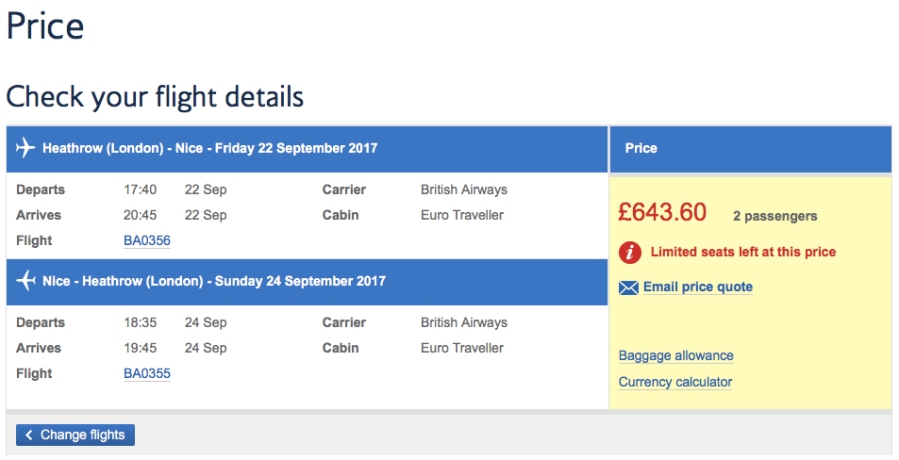 I therefore looked for Avios redemption flights but for some reason every Sunday in had nothing on the return leg despite there being loads of availability outbound.

A further look online showed that only the earliest flight of the day had any seats left. I went to bed, thinking that I would have to give up on the idea of going but had a brainwave as I was drifting off – the little-know Gold Priority Reward.

A perk of Gold status is that you can force availability of a ticket on any flight if a) it is more than 30 days in advance, b) that there are cash tickets for sale, and c) if you pay double Avios.

The added bonus is that the Gold Priority Reward tickets are refundable without penalty until T-24hrs, so should a standard Avios ticket become available I can rebook and save myself 4,000 Avios per person.

As these are reward tickets, I get luggage allowances (which I won’t need) but which add to the overall value. In total I paid 24,000 Avios and £70 for tickets which would have cost £707.60 if bought for cash. That works out at 2.66p/Avios which is an excellent return. Even against the HBO cost of £634 above,  which it what I would have bought if I had to buy cash tickets, that is still a 2.35p/Avios.

Or, to put it another way, sign up for the British Airways Premium Plus card with a referral and get 26,000 Avios which could easily turn into £691-worth of flights if you were in the situation above!