The Nira Caledonia is a small luxury boutique hotel set in 3 adjoining Georgian townhouses in the heart of Edinburgh’s New Town. It is part of the Small Luxury Hotels of the World group and is well placed to be there. On a quiet residential street, it is unobtrusive and understated.

There are only 19 rooms and 9 suites, but they have been tastefully designed to ensure that there is a range of accommodation options.

I got to the hotel at about 5pm and was warmly greeted by George on the front desk. The reception area is small and not somewhere you can spend any time, but it is next to the cosy bar so you can spill out into it if necessary. The staff were friendly and happy at every interaction I had with them.

I had lived in Edinburgh for 4 years, and am well-versed in the high ceilings and grand rooms, but my suite was something else.

The furniture and the wall paper were all dark, which highlighted the luxurious bed in the middle of the room. The two large windows were not particularly useful at that time of day in Scotland in winter, but allowed the light to stream in the following morning. 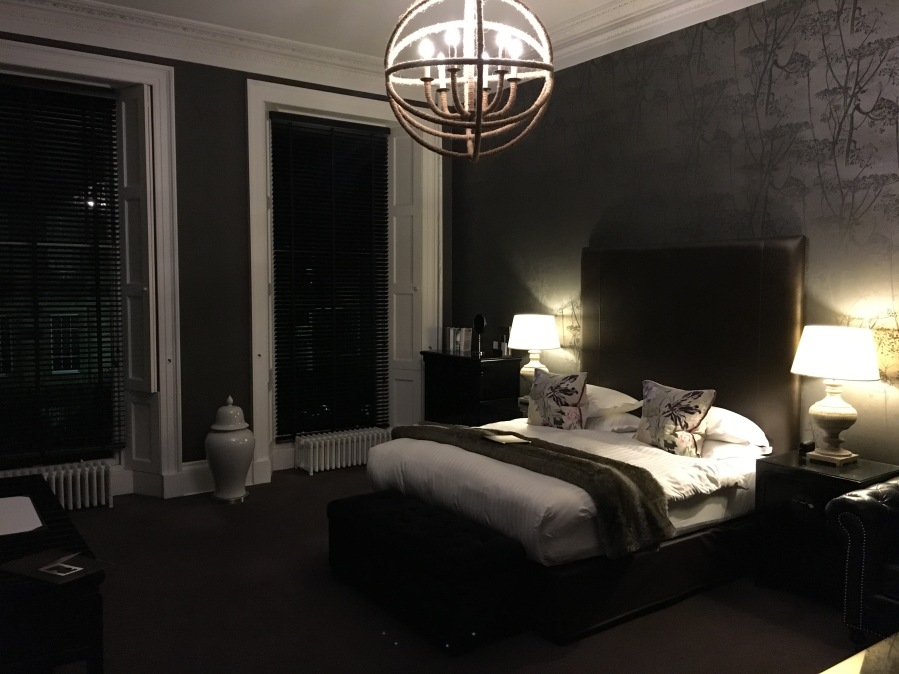 There was a Nespresso machine, which I love, and a small mini-bar.

There was also a half bottle of champagne in the fridge which is complementary for all guests who book direct. I would have preferred this to have been in an ice bucket rather than the fridge, but it was cold enough.

There was a very comfortable sofa forming a nice seating area, but I felt it needed a lamp where the coat stand was to brighten it up. The same could be said for the desk; comfortable to work at in the day, but too dark in the evening.

The other thing I found a bit strange was the peeling paint on the central heating pipe. It looked out of place in an otherwise excellently turned out room,  and it would not have taken a lot to fix.

I had been given a suite and this one had a jacuzzi in the bathroom, but is not one of the ‘Jacuzzi Suites’ advertised on the website. 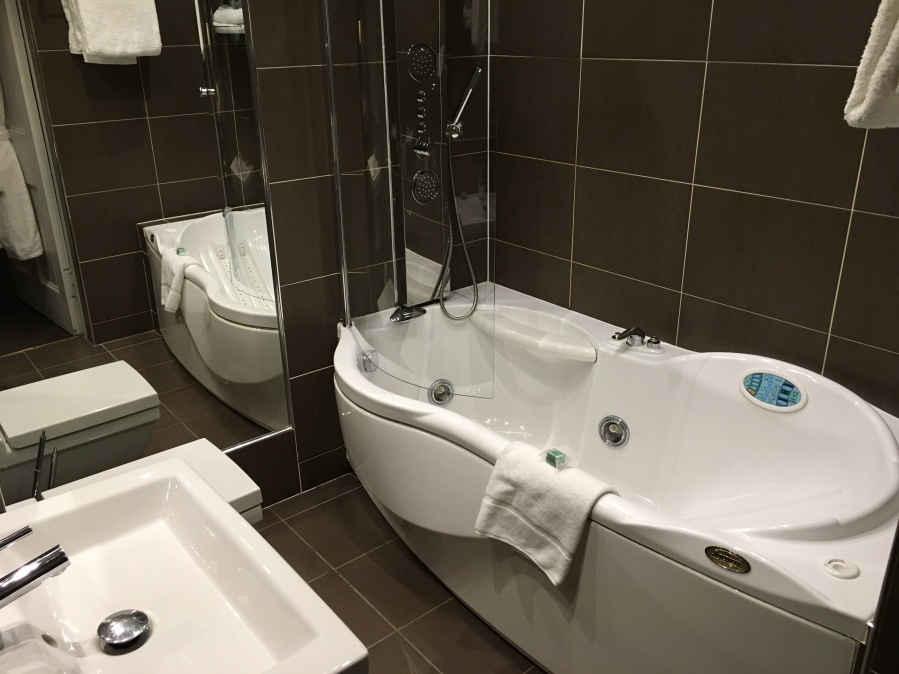 The shower served its purpose, but was not as powerful as I would have liked. A delightful range of L’Occitane toiletries were in the room, as well as a cute little rubber duck, and fluffy white dressing gowns. 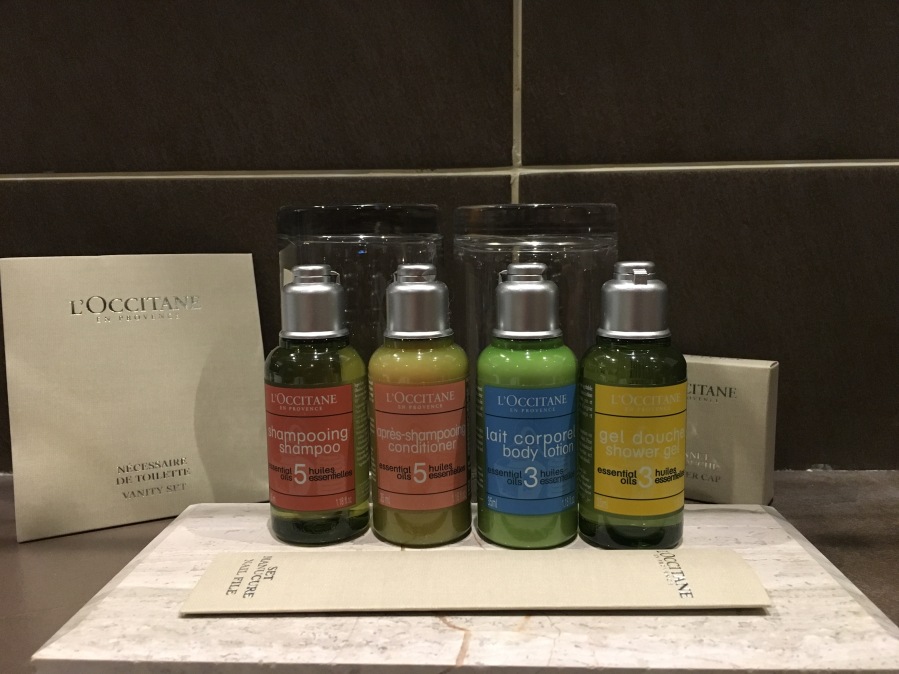 I had a drink in the bar before heading out for dinner and found it to be a very cosy place. There is a large selection of whisky and wine, as well as a decent assortment of bottled beers at very reasonable prices. 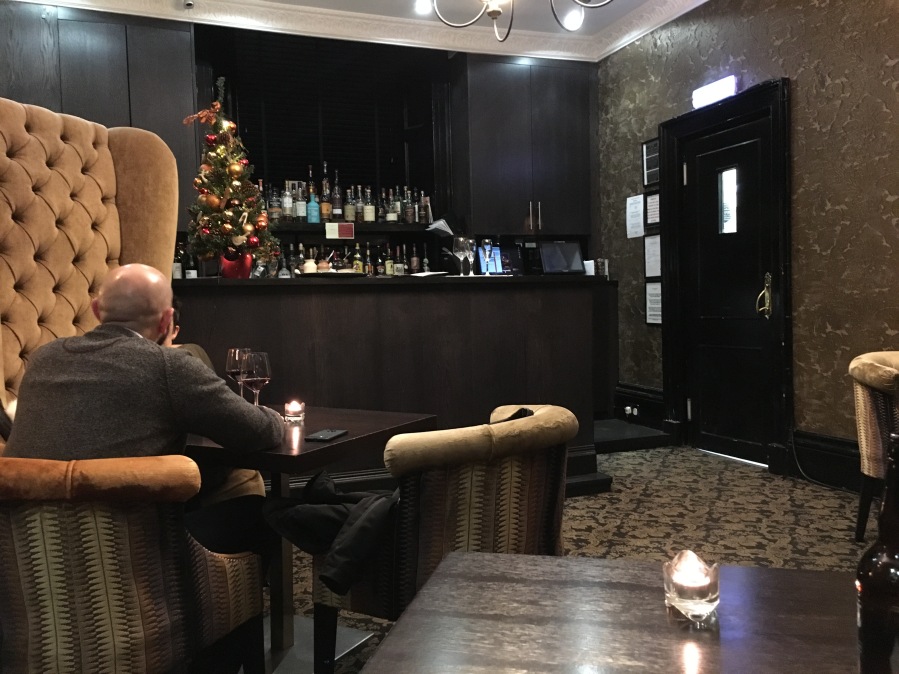 My pint of IPA was only £4 which I charged to the room. I thought that this was very reasonable, given the luxurious feel of the hotel but maybe I am just jaded by London prices!

Breakfast is served 8am – 12noon on the weekends and is in the restaurant which is attached to the bar. If not included in the room rate, the choice is £9 for the Continental buffet option or £15 for the addition of the hot options.

I really enjoyed the selection of things available but did feel that they were running low and had probably been out for a couple of hours, seeing as it was 1030 when I arrived. I am not sure how often, or if at all, the items were replenished as there were certainly empty platters and bowls in the buffet area.

I opted for the vegetarian breakfast which was delicious – it was just a shame that the portion was so small!

There were not many tables available – I counted 3 tables for four and a further 6 tables for two, and I was lucky to get a seat. To get round the issue of space, the hotel offers guests the option to have breakfast in the room.

I really enjoyed my stay in Edinburgh, and the Nira Caledonia is a great choice for a romantic getaway; just off the beaten track, luxurious but not overbearing. Despite a couple of things that could have been better, I am looking forward to finding an excuse to go back; after all – I never tried the jacuzzi!

This review was arranged for me by Claire at Luxury Travel Diary, the UK’s largest luxury travel blog. The hotel kindly gave me one complimentary night with bed and breakfast, but all other expenses were paid for myself.