After a  busy day, We checked out and took the train back to Frankfurt Airport. This time it was one of the lovely DeutsheBahn ICE trains, which are fabulous. We were the airport about 5 minutes faster than it took in reverse, but I think that we lost this time again in having to go up and down and round the houses to get from the station to the airport.

We then had a very tricky time in getting through. Our passes said go to Terminal 1C which was where the LAN check-in desks were, but the C area security was not for the LAN flight. We found out that we needed to go to the B section for this, so off we went. We were not granted access to the fast track and it took at least 10 minutes to get through – everyone had to go through a body scanner as opposed to the normal arch. We then got to a section with some gates and some passport control. It was not clear but we went through the passport area and, remembering something that I had read online, followed signs to the Air Canada Maple Leaf Lounge. There were no signs on the outside, but we asked at the desk and were glad to be in the right place. I went straight in for a shower and then settled down.

There was a good selection of food for such a small lounge. The highlight for me was the Weissbier on tap and the little pretzel tree.

There was great views of the apron and our plane was nearby. 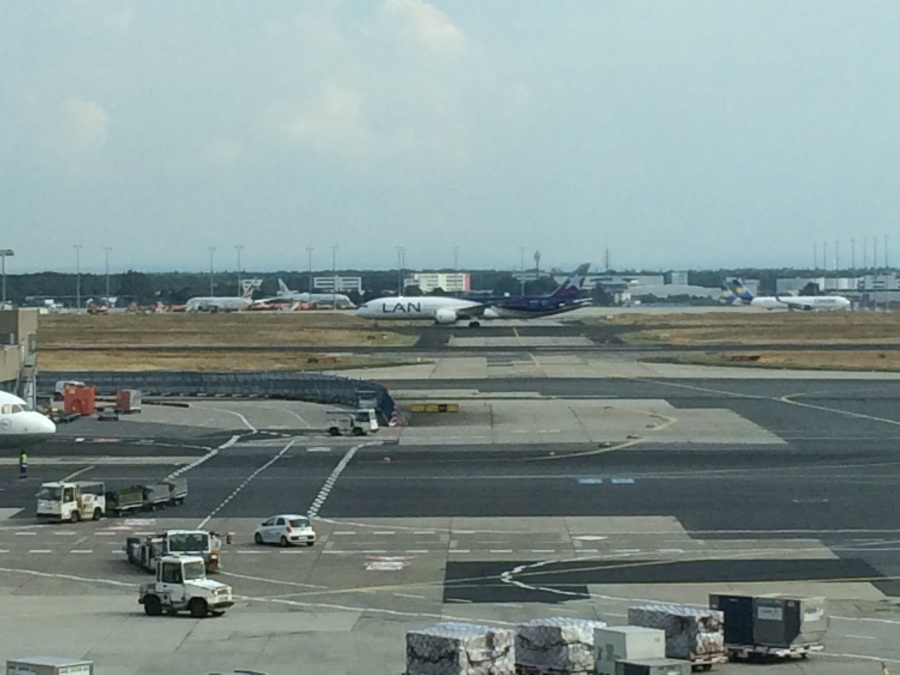 We boarded quickly and settle down into row 2. The service was similar to the outbound so I am not going to repeat it all here. Knowing the drill, we were soon off the plane, through immigration and out to the shuttle bus.

On arrival to the hotel we were warmly greeted and the receptionist was pleased to inform me that she had upgraded us to one of the suites. These, according to the website, come with Club Access and a jacuzzi in the bath. Sadly, as they only have one bed, I had to decline the offer. I did ask as to whether we could have Club Access instead, but this was not forthcoming. In this case it was no big deal, as we were only in the hotel for 10 hours and didn’t need drinks of breakfast. I got a letter under the door from the manager – a generic one – hoping that our stay was good and that we could email any feedback. I sent an email the following day to say that we had a great time on both stays, and it was a shame that we couldn’t take advantage of the suite. I mentioned that I would be very keen to see it on my next visit on the way to St Martin via Miami next spring. To my surprise, I had confirmation through AwardWallet over night that the manager had indeed allocated us to a suite.