After a lovely stay at Tsala Treetop Lodge near Plettenburg Bay, we moved on to Knysna and stayed in the Turbine Hotel and Spa, a converted old wood turbine mill, on one of the estuary islands, Thesen Island.

It is promoted as a 5* Hotel, but in reality, it does not live up to the hype. It’s very quirky, and not to everyone’s taste. However, it was pleasant and allowed us to explore the area which has a wealth of beach walks with the most marvellous sandy stretches for miles.

We returned our hire car to Avis. We always go with them as we get a few more Avios in the bag and the free extra driver when going through the BA Executive Club. We made our way to George airport which is a busy wee place with flights to most cities in South Africa.

It was a doddle through security and we waited in the departure lounge for a couple of hours. Whilst it may not suit some people,  we like to make sure we are on time!

We flew Mango, a codeshare with South African Airways, on a Boeing 737-800, which was almost full.  It was a bumpy flight, but efficient and got us to JNB on time.

A trek through OR Tambo airport to the international end, check in, security and passport control, was no problem, with a short detour into the quality concourse shops, but did not buy anything. So, am home with some rand in my pocket for the next time!

We spent a couple of hours in the galleries lounge before making our way to the plane. The next part of our trip was leaving Johannesburg on the British Airways A380. We were flying business class rather than first class this time for our return leg home. We were met at the cabin door and personally addressed by name. We were offered a glass of champagne which was very nice and we also given a complimentary at toiletry bag. 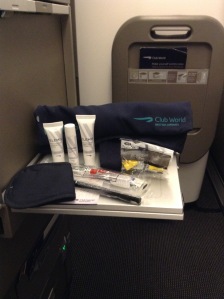 However I have to say it was not quite as posh as the one issued in First class and neither did we get pyjamas or a nice comfy mattress spread onto the reclined seat. I support that this is part of the differentiator to encourage one to upgrade!
What I did like about the seating area are the storage lockers down the side of the plane which are easily accessible by the person sitting at the window seat. However there is not much storage other than a small drawer for all the other seats. 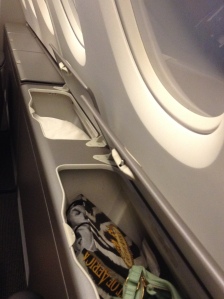 Takeoff was very smooth and very quiet indeed – I was actually very impressed, although this is not the first time that I flown on an A380.

Unfortunately the seating arrangement is not conducive for a romantic dinner-a-deux,  given that the footstool is not actually a seat and is likely to collapse if you sit on it. The meal consisted of a cold salad starter plus another salad and the option of beef or fish or a vegetarian meal with various selection of wines. Dad was not very impressed with cheese and biscuits selection and it did look rather meagre.

Dinner over and it was time for watching a couple of movies and I was delighted to see that Bridge of Spies had made it onto the British Airways listings – it was a rather good film! I then went on and watched the Man from Uncle. As it was quite late,  it was time for a snooze but this was challenging as there was a gentleman in the cabin who was an extremely loud snorer, so even with my earplugs in and the headphones on I could still hear him. Maybe it’ll be a daytime long haul flight next time!

Given that the upper deck of the A380 is business class, the loos for the front cabin are in the nose of the plane. These are the biggest loos I have ever seen on a plane! 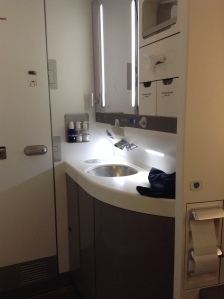 I assume it’s in this area that Emirates have converted into a shower that Jennifer Aniston is trying to locate in the advert. Whilst waiting to get into the loo in order to take pictures to post for Misterairmiles blog the loo door opened and two people came out – mile high jinks? Certainly plenty of space…!
It was a relatively smooth flight back to London and we landed at 0530 in the morning. We had to go through security passport control but we did make it to the Galleries for breakfast. Boarding for the flight back to Aberdeen took place at 0800. It was interesting that my little app of flights (MyFlights) was able to ping an hour earlier and let me know that there had been an aircraft change from an A321 to A319. It was a very full flight and we were offered complimentary breakfast – however it didn’t come with nice china cups and proper metal cutlery or a cooked option – this was economy!

It was a pleasant flight back up to Aberdeen and it was dry. We collected the car, headed home, stopped off for a coffee and were home by 1400. All in all, a very nice little 10 day break in South Africa; got my first experience of first class which was very nice and I would love to do it again!

So, what next for MummyAirmiles?! Well, they have already got their next First trip lined up in the spring, using another AmEx 241 on a redemption flight to Rio, coupled with a cruise and some exploring of South America. The point-pursuing pensioners have also taken advantage of BA’s promotion a few months ago where 30,000k Avios got £500 off the cost of flights and coupled this with their first ex-EU (from CPH) to take a few days in New York. The last email I had from Mum went something along the lines of “Sweetheart – tell me about these cheap flights to Honolulu for the summer. We need to get Gold before we drop out of Bronze. Oh, and is there any availability to Costa Rica in the winter?”

I think that she might need to start her own blog…!