I had my first ‘business’ trip earlier this week; being a teacher, these things dont happen very often. I was speaking to some colleagues in Manchester with my Examiner hat on and needed to be there for an 0845 start, meaning travelling up after school the day before. The train was going to be £110 one way, and I didnt fancy driving so I persuaded them that flying was the cheapest option.

I boarded the bus from right outside school at 1700 which took me directly to T5 (well, as direct as an hour long bus ride to do about 7 miles can be!) I was just travelling with hand baggage, so was through security and into the lounge in about 10 minutes. A fellow traveller then guested me into the Galleries First lounge, where we spent a good two hours eating and drinking. Don’t get me wrong, it was not gourmet food, but I probably would have paid £30 for what I ate and drank at a restaurant. The flight was fine and I was impressed at how the crew managed to serve everyone on such a short flight.

Flying home the next day, I got the airport at about 1700, thinking that I would be spending the next 4 hours in the lounge catching up on emails and doing some admin. I could see the flight was delayed, so asked at the desk if there was any chance of getting on an earlier flight. The lady immediately picked up the phone and said “I know its closed, but I have one more in the lounge with only hand luggage – any room?”, after which she issued me a new boarding pass and told me that she would call the flight as it was delayed and expected to leave at 1800. After a quick drink, it was called and I headed down to the gate. I was a little sad that I had given up 1A (having moved at T-24 from 10D in the exit row) into 8A which I expected to be a cramped seat – but at least I was getting home much earlier.

When I boarded, I was in for a treat. The A321 on the route had been an aircraft swap at the last minute to a plane which normally flies to Cairo with a Club World 2-1 / 1-2 configuration in the first few rows – 8 being the last one! 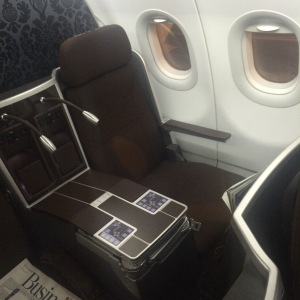 I had a lie-flat bed on the shuttle down to LHR – of course I tried it out! It even had a massage function.

I got home on an earlier flight, in an uprated cabin having had nice food and drink in the lounge and a G&T on board, got some airmiles and tier points all for less than the train. This is why I love British Airways!

3 thoughts on “This is why I love British Airways…”