For those of you who have been following, this is the first day of my holiday / tier point run to Las Vegas which I have been tweeting about using the hashtag MrAdoesVegas. I dont think that I am going to break the internet, but it is an easy one to follow. I am going to be writing up the report in more detail, trying not just to repeat what was in the tweets, so hopefully there will be some other interest for you here as well.

After an early start to get my hair cut and then a quick dash across town to collect my bags, I arrived at Paddington in time for the 1125 Heathrow Express. Now, because I had been at the barbers or on the tube for most of the morning up until this point, I had missed that there were electical issues at the airport, save for a text from my wife to say that the HEx was now back to normal.

I arrived to find massive queues everywhere. I wandered down to the Club Europe desks to join the back of a winding line and some bemused passengers.

In the end I only had to wait for about 10 minutes before I got to the desk. The lady was very friendly – perhaps because it turns out that I have exactly the same name as her son – what are the chances of that?! She told me that the ongoing issues at the airport meant that there was an 8/10 chance that my bag would not make it to the airport. I did ask as to whether it could just stay here and be loaded onto the LHR-JFK flight tomorrow, but the only way for this to happen was for me to schlepp the bag downstairs to left luggage, pay the fee, exit the airport tomorrow to retrieve and then check in the bag. I took my chances.

Fast track security was, like all the other areas, chaotic, but I was soon through and headed for the Galleries South lounge. I went for this one as I knew it was bigger and therefore more likely to have space, even though I haven’t been to either. (Note to self: go to Galleries North next week on the return to Dublin for comparison!). There was plenty of space, newspapers galore, champagne on request and food.

I had some courgette, pea and mint soup which was tasty and just enough to satisfy my appetite. 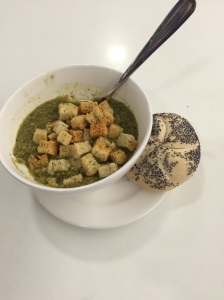 I went to find a quiet corner, had a Fever Tree tonic water and waited to board.

Boarding was called from A8 so I dutifully went a few minutes later, only to find nothing happening. The gate staff were just sitting around and the usual gang of DYKWIA types were already hanging round the fast track. Once boarding was called (which was basically by not being called)) everyone seems to merge into the same Fast Track queue. Now, I like efficiency and I dislike when people flout instructions, so I was not at ease when everyone was piling through one barrier and not using the General Boarding Lanes.

Once aboard, it was clear to see one of the reasons we were delayed slightly; they were still unloading the bags from the inbound.

Seat: 9F – Club Europe. It was meant to be 11F but the curtain shifters had their way.

The flight was good. There was the hot towel brought round and once in the air, lunch was served. It was a chicken salad with a mango panacotta to follow. Champagne was available in the form of Monopole blue top, and a full bar, along with tea or coffee.

My only bugbear of this flight is the ridiculous size of the seat in Club Europe – insofar as that it is no bigger than a normal EuroTraveller seat. My knees were rammed up against the seat in front the whole time.

Given than I am only a Blue member at the moment, I took the CE for the lounge access before and fast track; once I have this as a Silver benefit, I will be better off booking into Economy and selecting an exit row.

Arrival was smooth and the bags arrived – so the check-in lady was pessimistic! I then pottered through the terminal and had a 5 minute wait for the free shuttle to the Crowne Plaza (and Holiday Inn)

Given my previous dissatisfaction at the Holiday Inn Express Belfast, I had paid an extra 5,000 points to move next door to the plusher Crowne Plaza when I read that it was in the same place. And I am so glad I did! The room is big, with everything you could need – it has a safe, iron, trouser press, fluffy robe, desk, mini-bar, full sized bath and separate shower… I could go on! 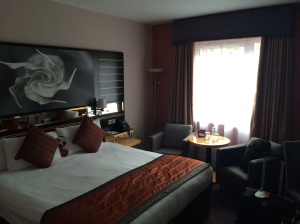 It also has a very well equipped gym which I spent an hour in in an attempt to ward off the effects of flying and eating and drinking!

I then headed into Dublin. The bus stop is a short 4 minute walk from the hotel and the buses seem to come every 5-10 minutes. You need the exact change of 2.80 EUR for a single into town, although I ended up just giving 3EUR each time. I had done a quick search on restaurants – I wanted something vegetarian, not too expensive and somewhere were I wouldn’t feel awkward dining alone.

Cornucopia fit that bill perfectly, and although the food doesn’t look that appetising, it was superb, I had a casserole of tofu, sweet potato and brocolli in a lime and coconut sauce, accompanied with a house coleslaw and a radicchio, feta and broccoli salad, washed down with a lemonade for 16EUR. 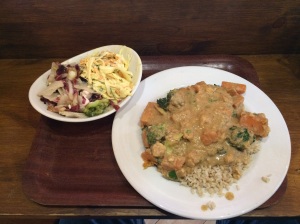 I used my Supercard (as discussed in this post) which is showing up at £11.43, a mere 9p off the xe.com conversion!

A short bus ride back to the hotel, a free pint of Guinness’s new Hop House lager in the bar and I am ready (eep!) for my 5am wake up call for Day 2…!

One thought on “Mister Airmiles does Vegas – Day 1”