I like the ease and simplicity of a dedicated terminal like Heathrow’s T5, JFK’s T8 or Madrid’s T4 where most, if not all, of the flights leaving are from the same airline; it makes thing very simple, especially if it is your ‘home’ airport like Heathrow is for me.

At Heathrow T5 there are four lounges that I can access whenever I fly, although I usually stay in Galleries First, as well as the Concorde Room that I have been in a couple of times. However, as they are all operated by British Airways, they are all in the same style with differences based on status rather than concept. That can be a bit repetitive if you fly frequently or if you have a long wait before your flight.

This is where the lounge offering at Terminal 3 comes into its own. In the last couple of years, Cathay Pacific and Qantas have opened new lounges alongside American and British Airways and I recently had the opportunity to do a direct comparison.

I started in the Cathay Pacific First Lounge for something to eat. I like the full menu with plenty of choice (and I apologise for the poor quality of the photo!)

I had the calamari, below, which was delicious, followed by the pan seared salmon which was also tasty, washed down with a glass of Baron de Rothschild champagne which retails at around £45 a bottle

After lunch, I moved onto the Qantas lounge; this was the first time that I had been in T3 since it opened so I was keen to give it a go. The main feature of the lounge is an extensive Gin bar:

And some recommendations of what to have.

The lounge is split over two levels with an impressive staircase up to a dining area and cocktail bar.

The food was buffet style and nicely laid out, but I didn’t try any as I had just eaten.

Having had a look round, I moved onto American Airline’s offering. I liked the branded coffee machine. 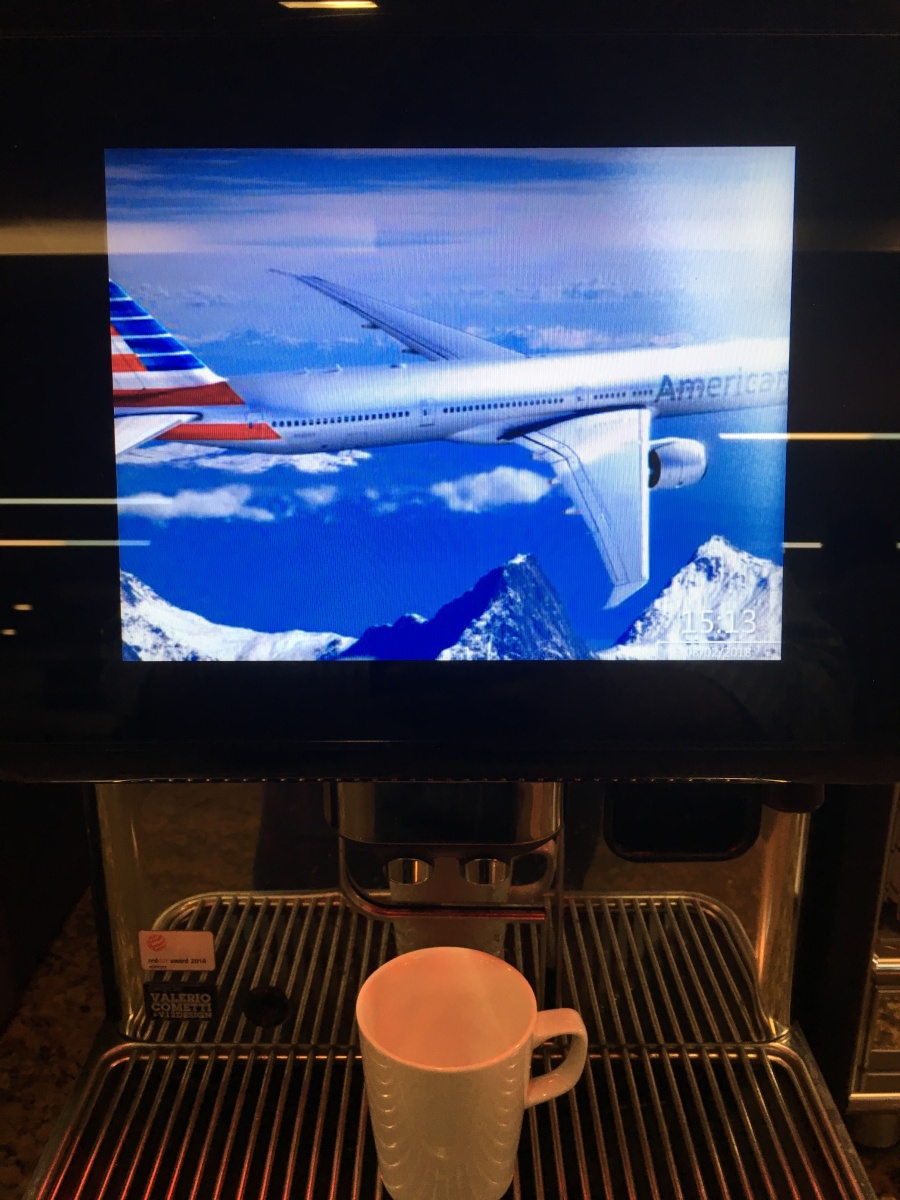 There were also a number of bite-sized snacks and deserts which were reasonably tasty.

Unlike in America where lounges usually have staffed bars, there was only some fridges and some free-pour spirits.

There was a separate dining area but there was no-one in, and the atmosphere was dead. I imagine that the only reason you would be in there is if you were flying in Business or First on American and had no status; it was dark and soulless.

Finally I made my way to the British Airways lounge. I had been told that the lounge was rubbish, but this was the judgement of my Mum who had only been into the Galleries Club section. The First part was much nicer. It has the usual feeling you get in the T5 lounges, with a nice champagne bar with apron views.

By the time that I had got round all the other lounges I didn’t have very long in the BA lounge before it was time to go.

I am glad that I was able to whizz round and see what was on offer from each of the lounges as it means I have a good idea of what is available.

I still like the Cathay Pacific First lounge for a sit down meal so would probably head there first in future for food but I might to the BA Gold buffet in the morning if I was hungry and wanted a full cooked breakfast. Mid-afternoon I think that Qantas would be my preferred lounge for the Gin bar, and if I was flying long-haul I would stop by BA on the off-chance of a massage or something in the spa. I would not waste time with American!

I am glad that there is such a range of options for oneworld members to use and feel there is definitely something for everyone across the alliance.