We had booked several Shore excursions, arranged by the cruise ship. We accept that there is a huge mark up on these, but they are well organised, and should anything happen that delays return to the ship, then the ship waits for you unlike a private tour! 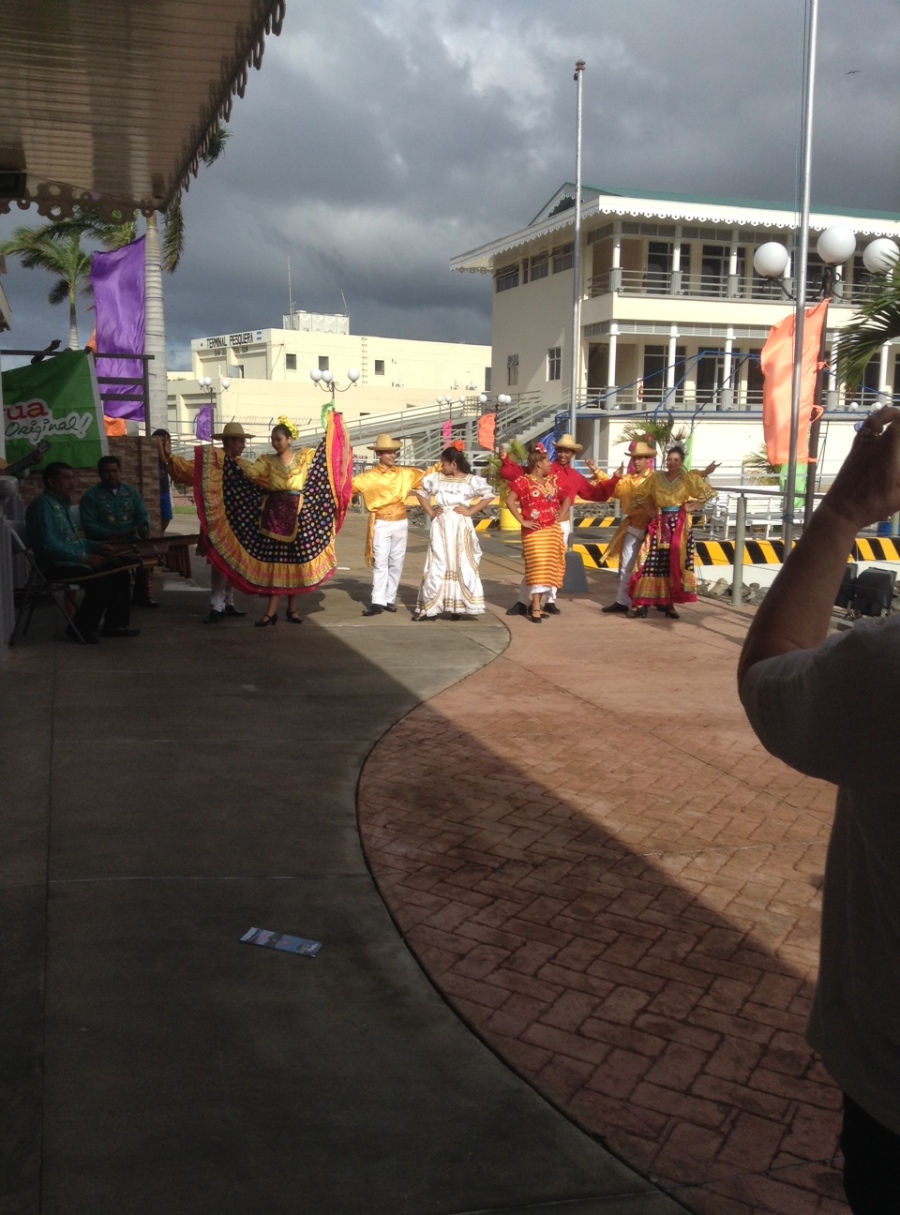 We were met at the port by some musicians and dancers, and several stalls of artisanal goods which we looked at but didn’t buy.

This tour took us on a coach journey through the countryside and ascending to an active volcano. It was a good hour’s journey there and back. The countryside was littered with rubbish and was quite flat. However, in the distance were many volcanic peaks.

The highlight was a good look into the rim of the volcano – ‘The Mouth of Hell’ and if we had been lucky, we might have seen bubbling lava. As it was, the steam was pretty good at obscuring the view!  Our guide was entertaining, and gave a general overview of the country, politics and history.

Afterwards, we drove to a hilltop bustling village, again, artisanal goods on display, as well as a good view point 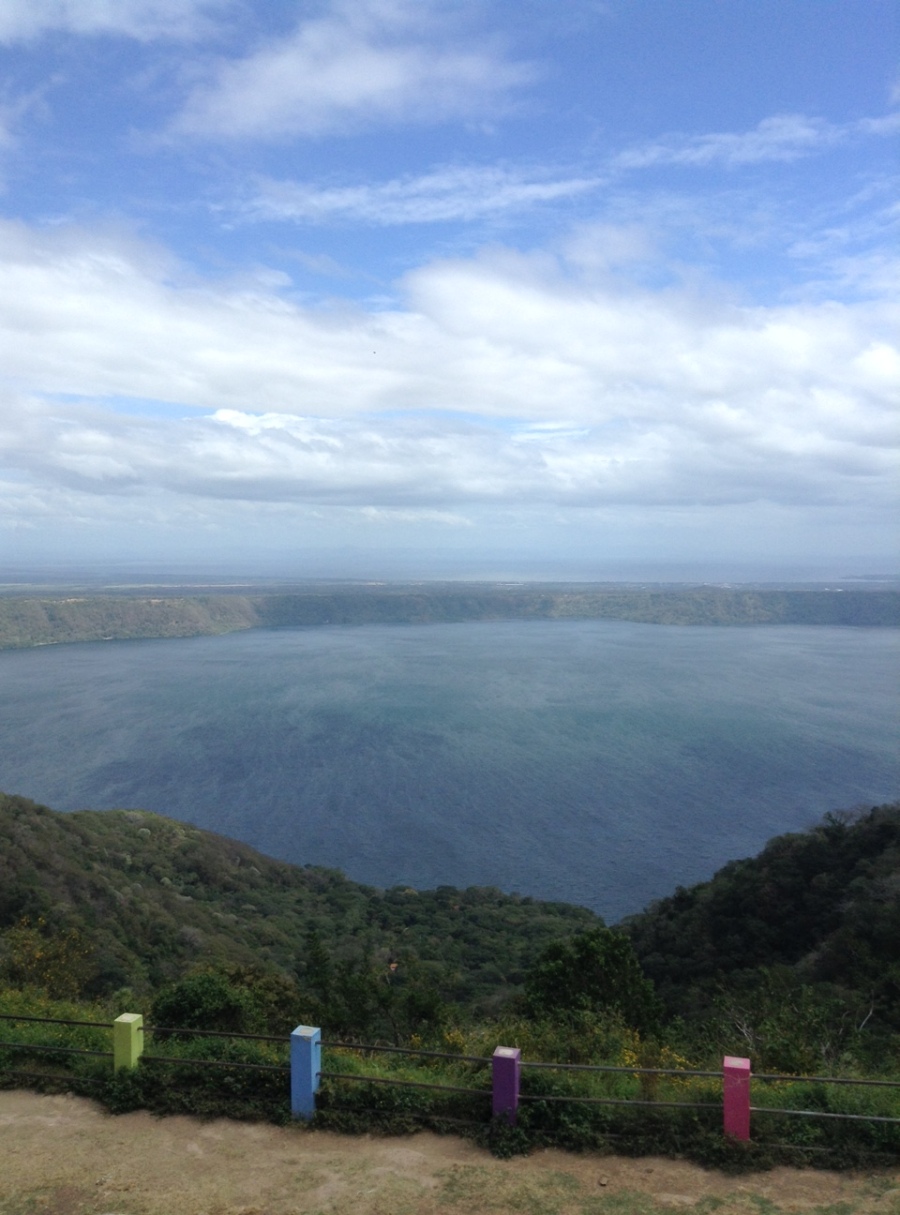 This trip, again, involved a volcano and a Mayan Ritual. It was our most expensive tour and it was dreadful!  El Salvador, near the coast, is quite flat. The road side was littered with rubbish and many of the poorer folk live in tin shacks and small dwellings.

Our guide was a young, enthusiastic chap who came from the region of the volcano we were visiting. The trip was billed as seeing the crater of said volcano, a walk in the forest, pointing out the different flora, fauna, accessing a terrific viewpoint, and observing a Mayan aspect of culture. His command of English (better than my Spanish) was probably OK but needed help with pronunciation and vocabulary. He gave little information about the history, politics, geothermal activity as we had on the previous tour. 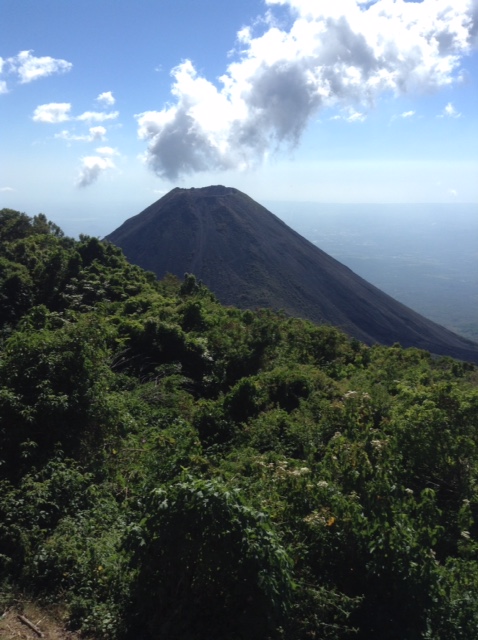 Hmm – volcano peak in distance, very little fora and fauna, viewpoint OK. Mayan activity conducted in picnic area, with general public milling about. No explanation; was it a blessing or preparing us for sacrifice?! 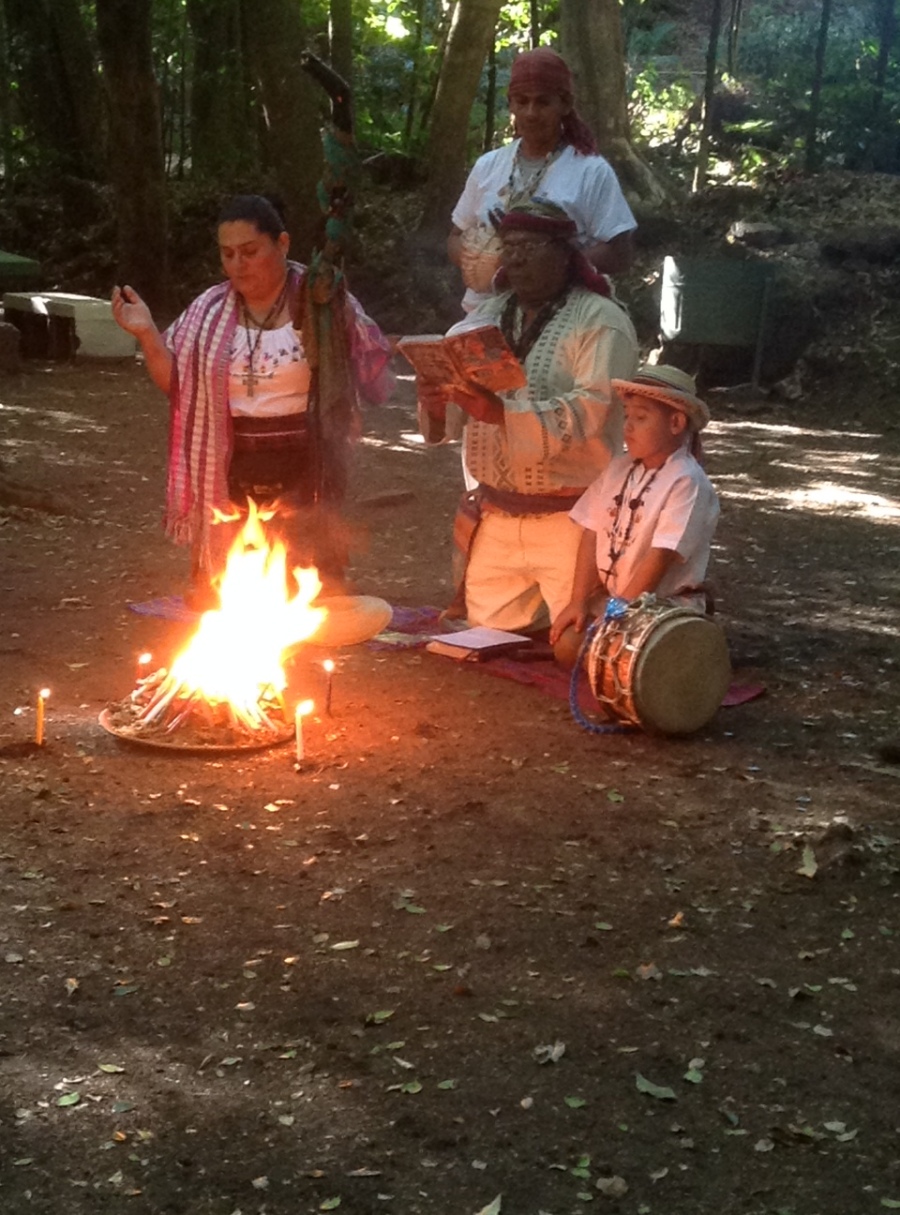 Our coach was small and when we thought it was full were instructed to pull down the mini seat and flip up the  backrest that was integrated into the arm/ side of the aisle seat. This then meant the aisle was progressively blocked!  Definitely not happy.

We were so disappointed with this trip for the price we had paid, and strongly felt it was very poor value so we complained to the Head of Hotel / Guest Services and have been advised we will get a full refund.

Excellent guide, full of information. Guatemala is a more prosperous country. We were taken to a nearby Mayan site where a number of carved stones had been uncovered, including what is believed to be the first stone depicting The Tree of Life. We visited a local church, decorated for forthcoming celebrations, demonstration and tasting (again!) of chocolate, entertained with skilled marimba players – very enjoyable music, dancing and a wander through the town square. This was a ‘cheap’ tour and so much better, in terms of value, information and content.

We had nothing planned here, so took the shuttle bus round to the local village, wandered about, bought a coke/beer and used the free wifi for an hour. I bought a wooden Mayan decorated face mask (or another ‘dust gatherer’ for the kids to put to a junk shop in due course!) The port itself was beautifully landscaped, with a pool and bar right beside us.

Here we had booked a tour to a Mayan archaeological site with a museum onsite, with an ‘immersive’ experience with the resident archaeologist.

This was a disappointment as the archaeologist never appeared, and according to the tour guide, he knew nothing about it.  His English was heavily accented, kept going off on a tangent, so was extremely difficult to follow what he was talking about.

If we had had an English leaflet and left to our own devices to walk around, we might have learnt more.

We were sufficiently disappointed that we complained, as did several others. We were initially offered a 20% refund, but felt that 50% was more reasonable so held out and were eventually offered it.