Our connection on the outbound MAD-MIA-SXM was really smooth as I reported here, and I was glad that we had a practice run through. Flying home, our plane was late in departing so a short connection became a tight one which was not helped by the lack of Flight Connections.

We were fortunate to be in the front row so were first off the plane. We ran up the jet bridge, turned right and got into a massive queue for the ESTA machines. The line of machines that look out onto the tarmac are fed by two queues but there are more machines on one side than the other – we found the side nearest the passport check is much quicker because there are more machines. 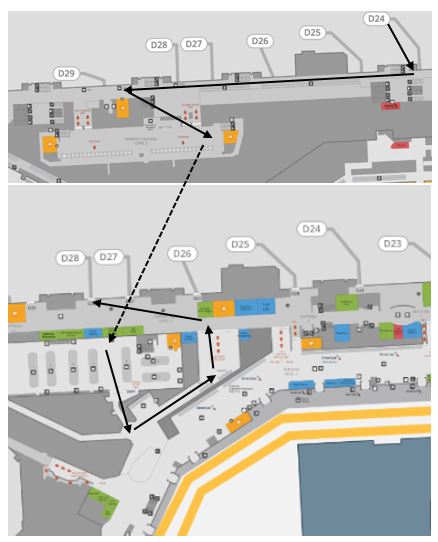 I was able to get jumped into a smaller queue at passport control and to the head of the line at the security recheck which was just as well, as when we got to D28 they were already boarding Group 3 – I hate to think what could have happened if we had not been allowed to queue jump!

When you look at the terminal map, you can see how close the gates are!

I know that security is paramount, and I am not suggesting any reduction in scrutiny, but a dedicated immigration and bag check late for connections would make life easier and reduce the risk of misconnects which much cost the airline money?!

2 thoughts on “Is Flight Connections too much to ask for?”