Arriving in from Jersey, I had to negotiate the transfer process which was relatively painless. Without my carry-on suitcase it was easier. I made my back to the lounge and followed the same procedure as before. There were several people Turing up with their Priority Pass cards and being turned away if they did not have reservations. Luckily there was no restrictions for me with my BA ticket and, once inside, it was not as busy as it might have been.

I was able to get a table and ordered a superfood salad which was fresh, crunchy and delicious.

Soon it was time to board for the international sectors of the day. Not flying from Gatwick often, I don’t know the layout that well and so I always seem to leave the lounge too early and end up waiting unnecessarily at the gate; today was no exception, but I was soon back in 1A for the third time in a row.

This short flight consisted of the afternoon tea service and a glass of champagne.

The catering differs ever so slightly between Heathrow and Gatwick so on this flight sandwiches come packaged with one egg, one fish and one meat compared to the two meat and one cheese on a plate that you get out of Heathrow.

We landed into Schiphol and were off the plane quickly – the joys of being at the front. Now, if I hadn’t checked my bag in, I would have been able to go straight to the lounge or the duty free but instead I had to go through passport control and collect it. My bag had been tagged with priority labels as all hold luggage is in Club Europe yet my bag was last off the belt. Literally. It stopped as soon as mine had fallen down the chute. Now, at least it arrived in one piece, but if an airline is going to put priority tags on a bag, they need to make it a priority. If they are not willing or able to sort it out then it shouldn’t be offered as a service. Had it been a ‘normal’ bag and came off last, then it would not have been an issue.

Anyway, with bag in hand, I went round to departures. Thankfully there was a fast track lane in operation and I was through quickly. I stopped off at duty free and then made my way to the lounge. It has been recently refurbished and it is very nice. There was one other person in when I arrived and at its busiest there were maybe 10 people.

The flight was called and 10 minutes later I was at the gate. It was another example of poor boarding protocol. There is a system and it should be followed. It is something like Club and Gold, then Silver, then Bronze, then everyone. In this case it was either priority or not. Usually it doesn’t bother me but sitting in the front row means you can’t put a bag at your feet so you need space to put both bags overhead which can be tricky. Fortunately it was not an issue. I had 1D/F to myself and the cabin was only half full.

Again, my special meal request hadn’t gone through properly so I had a gin and tonic and picked at the goats cheese and beetroot. The crew were great and the rest of the flight was smooth. We had some fantastic views of London as we approached landing. 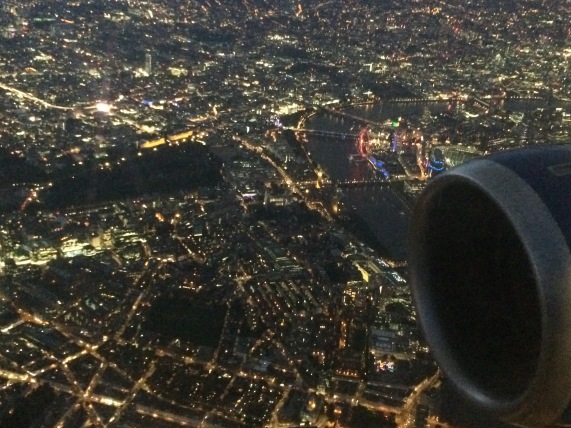 The finale  was being taken to a bus gate, and the feeling of dread. only for this to be wiped away as you realised that there is one bus for the Club Europe passengers only, and that it will take you straight to immigration in a matter of minutes. I was through, and in the hotel lobby within 15 minutes of disembarking.